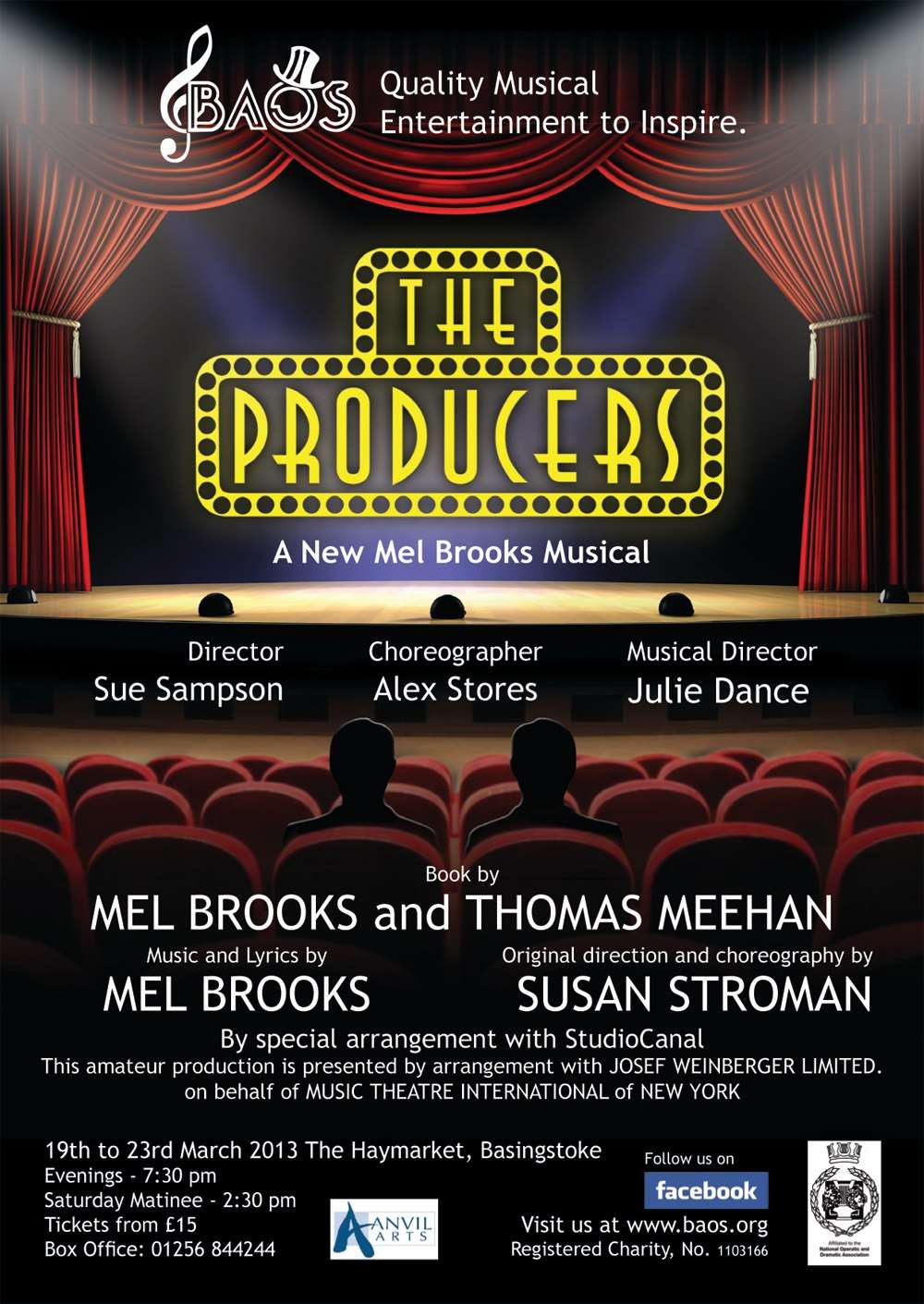 By special arrangement with StudioCanal

The show starts in Shubert Alley on the opening night of FUNNY BOY!, a musical version of HAMLET, produced by the indefatigable Max Bialystock. The usherettes enter wondering whether the show will be a hit or not. As patrons begin to exit the theater, the answer is clear: it's the worst show in town ("It's Opening Night"). A tuxedo clad Max appears. He tries to figure out what went wrong. He used to be the toast of Broadway and now he's a disaster. He vows to be on the top again ("The King Of Old Broadway").

We transition to Max's once elegant, now shabby, office, in which he is living. He is startled awake by a knock at the door. It is a schlubby accountant named Leo Bloom who has come to handle Max's books. One of Max's investors, an elderly lady he refers to as Hold Me-Touch Me, suddenly comes by. Max forces Leo to hide in the bathroom. Hold Me-Touch Me has brought Max a check, but she won't give it to him until he plays one dirty game with her. Leo accidentally walks in on them and immediately returns to the bathroom until she leaves.

Once Hold Me-Touch Me is gone, Leo apologizes for interrupting Max. Max is prepared to be mad at Leo but, surprisingly, Leo is a fan; he reveals a secret desire to be a Broadway producer. Max tells him to just do the books. Leo realizes that Max's books do not add up, but when he tries to tell Max he gets so nervous he ends up in a fetal position on the floor. Max finally coaxes him off the floor and Leo explains the discrepancy: the show raised one hundred-thousand dollars, but only costs ninety-eight hundred-thousand. Max begs Leo to help him hide that small amount of money rather than sending him to jail. Leo agrees as the IRS is unlikely to look through the books of a flop show. Max then makes a simple observation: under the right circumstances, one could make more money with a flop than with a hit. Suddenly, Leo is listening.

Leo returns to the drudgery of his accounting job. After being berated by his boss for being six minutes late, he imagines what it would be like to have his dream of producing a Broadway show come true ("I Wanna Be A Producer"). He quits his job and returns to Max's office, exclaiming that he wants everything he's ever seen in the movies ("We Can Do It [Reprise]"). Max and Leo begin to pour over scripts in Max's office. The plays are bad, but not bad enough. Finally, Max finds the worst play ever written -- SPRINGTIME FOR HITLER: A GAY ROMP WITH EVA AND ADOLF AT BERCHTESGADEN.

In the West Village, Franz Liebkind, the author of SPRINGTIME FOR HITLER, tends to his pigeons on his roof. He wears lederhosen and a German Army helmet and sings an ode to his homeland ("In Old Bavaria"). When Max and Leo arrive, Franz is skeptical of their intent. However, he is thrilled with the prospect of clearing the Fuhrer's name on Broadway. He won't sign the deal with Max and Leo unless they prove they will do justice to the Fuhrer's memory by joining him in the Fuhrer's favorite song and dance. He also makes them take the sacred Siegfried Oath to never dishonor the memory of Adolph Elizabeth Hitler, as the Fuhrer was descended from a long line of English queens ("Der Guten Tag Hop-Clop"). Leo worries that they're in too deep, but Max assures him he'll let him know when they're in too deep. They take the Oath and the rights are theirs.

Next, they go to the home of noted director Roger De Bris. Carmen, his assistant, is fielding phone calls when Max and Leo enter. De Bris enters in a silvery full-length Art Deco gown. He tells Max that Franz's play is remarkable, but too dark and depressing for him to direct ("Keep It Gay"). However, when Max dangles the idea of a Tony, De Bris signs on to the project.

Back in the office, a gorgeous, young Swedish woman named Ulla enters. She wants to audition; she knows she has what it takes to get their attention ("When You've Got It, Flaunt It"). Max offers her the part and the side job of secretary/receptionist until rehearsals begin. Max then explains to Leo that producers never put their own money into a show, so now he must go pay a visit to Little Old Lady Land. Max does what he has to and literally puts his backers on their backs ("Along Came Bialy"). By the end, he has raised enough money to do the show and SPRINGTIME FOR HITLER is slated for Broadway.

Max and Leo arrive at the office to find that Ulla has tidied up the office 'Swedish' style. Everything is high gloss white. Max gets cash from the safe and exits to pay the Shubert's rent for the theatre. Alone, Ulla comes onto Leo and he responds in kind ("That Face").

At auditions, the creative team sees a series of terrible actors trying to dance and sing. Each singing Hitler is worse than the one before ("Audition Opening"/"The Little Wooden Boy"). During one particularly bad rendition, Franz jumps up on stage himself to show an actor how it's done. His performance takes the cake and he is cast as his hero ("Have You Ever Heard The German Band?).

We flash forward to opening night, where the usherettes are standing by ("It's Opening Night [Reprise]"). Leo, feigning ignorance, wishes everyone good luck. Roger and Carmen are aghast - they remind him of the old theater tradition of that phrase ("It's Bad Luck To Say Good Luck On Op'ning Night"). In the excitement, Franz actually does break a leg. The show must go on, however, and Max insists De Bris go on as Hitler.

The scene transforms to the show within the show, featuring Roger's big number. There are a squad of tap dancing storm troopers and follies girls with headdresses of giant pretzels, bratwurst, and beer steins; the number is tasteless, offensive, and hysterical. At the end of the dance section, De Bris as Hitler sits at the edge of the stage a la Judy Garland and sings to the audience. This is followed by the entrance of Stalin, Churchill, and FDR who are defeated by the singing-tap dancing Hitler. The number ends with the storm troopers forming a swastika that rotates clockwise and chorus girls astride cannon ("Springtime For Hitler").

When the audience leaves, Max and Leo await the negative reviews. But, much to their shock and dismay, the show is a hit! Leo and Max can't figure out how this is possible ("Where Did We Go Right?"). Leo takes the account books and is going to turn himself in when De Bris and Carmen enter. They are soon followed by Franz, who is brandishing a gun, furious that they have made fun of Hitler. Pandemonium then ensues -- the gun eventually goes off and the police break in to try and arrest the alleged shooter, Franz, who rushes offstage and promptly breaks his other leg. The cops arrest him and find the two accounting books on the couch. Max is arrested but Leo, who has been hiding, is convinced by Ulla, who has just entered in a slinky gown, that he shouldn't turn himself in. She wants to go to Rio with him ("Leo Goes To Rio").

In a holding cell a few weeks later, Max receives a postcard from Leo and Ulla in Brazil. Max replays the entire series of events becoming more and more upset about Leo's backstabbing ("Betrayed"). In a courtroom, Max is about to be sentenced when Leo reappears. He hands over the remains of the two million to the judge and reaffirms his friendship with Max ("'Til Him"). The judge, not wishing to break up such a touching friendship, sentences them both to five years in Sing Sing.

We transition to Sing Sing. We are at a rehearsal for PRISONERS OF LOVE, the latest production by Bialystock and Bloom. As the title song is being sung by the prisoners, a trustee enters with a pardon for Max, Leo, and Franz ("Prisoners Of Love"). They all celebrate as we transition to the Broadway production of PRISONERS OF LOVE. Ulla and De Bris appear as the stars. The show is in its fourth successful year on Broadway -- Max and Leo have become true success stories.