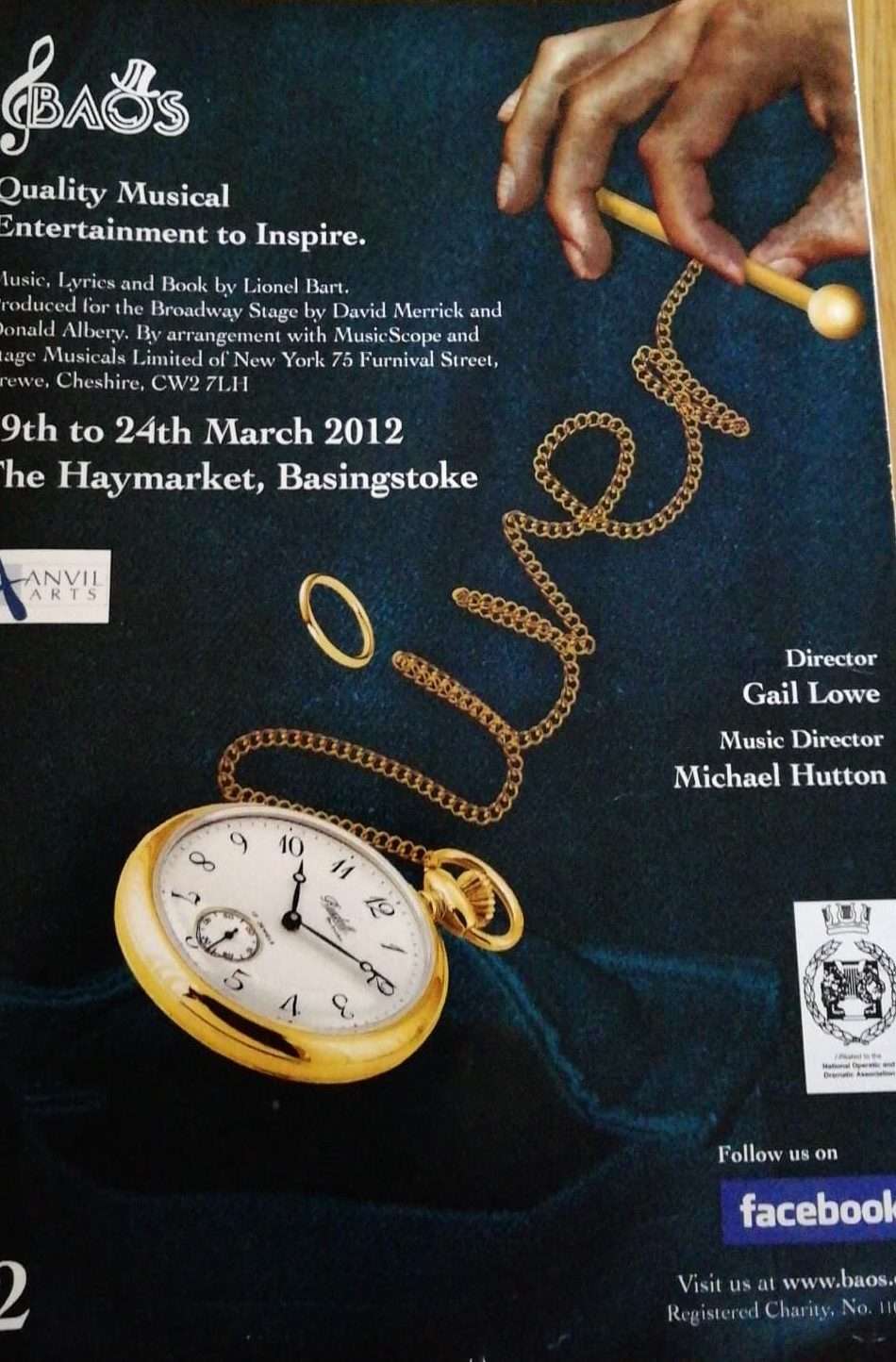 OLIVER!
is presented by arrangement with
MusicScope & Stage Musicals Ltd. of New York

Dozens of workhouse boys file into a large barren room and take their places at the table.  It is still raining outside while the boys dream inside of gorging their gullets with delicious eats... but are only given gruel to satisfy their hunger (“Food, Glorious Food”). At the end of the measly meal, one boy approaches the haughty Mr Bumble and asks for more. The request seems blasphemous to Mr Bumble and the workhouse mistress, Widow Corney, who catch the boy and demand to know his name before deciding how to punish him (“Oliver”).

After the chaos in the dining room, the Widow Corney and Mr Bumble retire to the Widow’s parlour. Widow Corney offers Mr Bumble some gin to calm his nerves, which gives him the courage to kiss her on the lips and propose marriage (“I Shall Scream”). The Matron interrupts them with Oliver. Mr Bumble takes the boy and his few belongings, planning to sell him for a good price (“Boy for Sale”).

Mr Bumble and Oliver arrive at Mr Sowerberry’s, the haggard undertaker who is interested in buying Oliver as a coffin-follower for children’s funerals. The undertaker’s wife, Mrs Sowerberry, agrees (“That’s Your Funeral”). Oliver is given a meagre meal of scraps and shown his bed amongst the coffins (“Where Is Love?”).

Oliver is startled awake the next morning by a loud kicking at the door. Noah Claypole enters a brash employee and instigates a fight by insulting Oliver’s dead mother. Oliver gets trapped in a coffin as Noah catches Mr Bumble to punish him. Amidst the chaos, Oliver escapes.

A week passes before Oliver, hungry and exhausted, meets a boy named Jack Dawkins, also known as The Artful Dodger. Dodger offers Oliver lodgings at the residence of Mr Fagin in London (“Consider Yourself”). Dodger leads Oliver to Fagin’s den, where he is instantly welcomed by Fagin and his boys and introduced to their line of work (“Pick a Pocket or Two”). After the boys have gone to bed, the sinister Bill Sikes arrives and unloads his burgled loot for Fagin before silently sneaking back into the night.

Oliver awakens early the next morning and witnesses Fagin having a nightmare. The whole gang soon wakes up as Nancy, Bill Sikes’ girlfriend, and Bet arrive at the den (“It’s a Fine Life”). Nancy immediately takes a shine to young Oliver (“I’d Do Anything”).

Nancy leaves to return to Bill Sikes before he wakes up. Fagin sends the boys off to start the morning’s pickpocketing, leaving Oliver under the tutelage of Dodger (“Be Back Soon”). In the streets of London, Dodger picks his first victim, Mr Brownlow, and flees the scene, leaving Oliver to be caught for the crime.

In a noisy, smoky pub called The Three Cripples, Nancy is encouraged by the clientele to perform a rousing song (“Oom-Pah-Pah”). The fun and revelry are immediately stalled when Nancy’s abusive villain of a boyfriend arrives, striking fear throughout the entire pub (“My Name”).

A frantic Dodger explodes on the scene and informs Fagin that Oliver had been caught and taken off to Mr Brownlow’s residence. Fearing the safety of their hideout, Fagin and Bill Sikes decide that they must kidnap Oliver back before he talks. Bill violently threatens Nancy to retrieve the boy (“As Long as He Needs Me”).

Oliver is given a clean bill of health after a visit from a doctor, and Mr Brownlow allows him to return some books and pay a debt just up the street (“Who Will Buy”). On the street, Oliver is abducted by Nancy and Bill Sikes and returned to Fagin’s den. Stripped of his goods and books, Oliver tries to escape. Bill threatens to bludgeon him, but Nancy intervenes, taking the brunt of Bill’s violence herself (“It’s a Fine Life – Reprise”). All exit, leaving Fagin alone as he ponders his life of crime (“Reviewing the Situation”).

Mr Bumble and Widow Corney, now unhappily married, argue in the parlour. They are interrupted by a visit from Old Sally, a former workhouse employee. Knowing that her death is imminent, she must reveal a secret that she has long held – Oliver’s mother died in her care after childbirth and left a single gold locket. Old Sally dies as the Bumbles set out to retrieve Oliver, hoping that they can track down his rich family. (“Oliver – Reprise”).

The Bumbles arrive at Mr Brownlow’s in response to an advertisement about any knowledge of Oliver’s whereabouts. Mr Brownlow realizes that the Bumbles are only out for personal gain and sends them away. He notices the face in the locket as his estranged daughter, Agnes, and realizes that Oliver is his grandson. Moments later, Nancy meets Mr Brownlow in secret and tells him to meet her at midnight at the London Bridge to retrieve Oliver. (“As Long as He Needs Me – Reprise”).

Nancy and Oliver arrive at the London Bridge, only to be surprised by a stalking Bill Sikes. Nancy will not let Bill take Oliver. He throws her to the ground and bludgeons her to death. Mr Brownlow arrives a moment after and sees Bill fleeing the scene. Alerting a crowd, they chase Bill back to Fagin’s, where they corner him on a roof, Oliver his hostage. A sharpshooter successfully hits Bill, who falls to his death, reuniting Oliver with Mr Brownlow.

Fagin, having successfully avoided capture, decides that maybe it is time to turn over a new leaf after all and leave the life of crime.