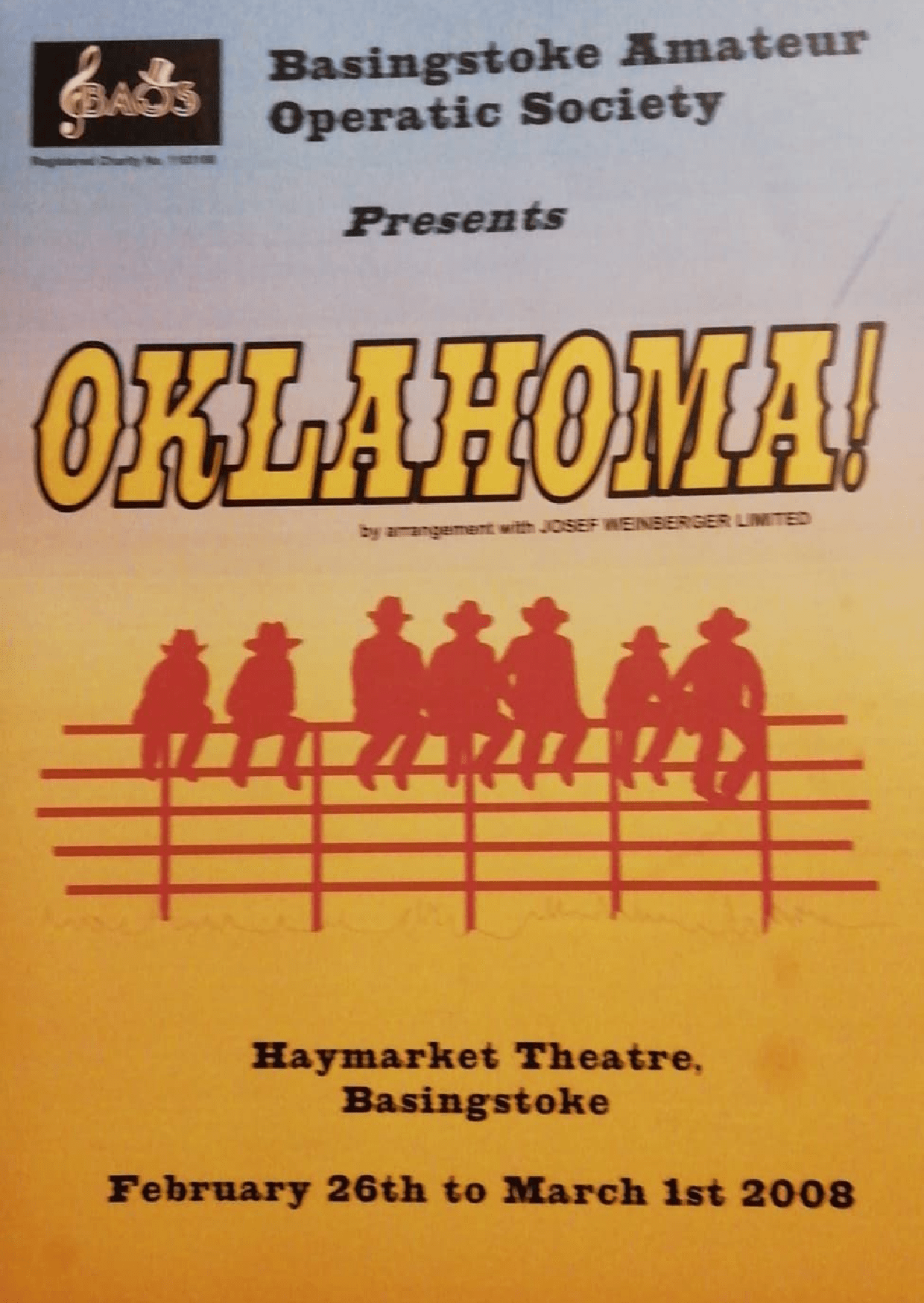 Based on the play “Green Grow the Lilacs” by Lynn Riggs

OKLAHOMA!
An amateur production by arrangement with R&H Theatrical Europe

On a radiant summer morning in a Western territory, Aunt Eller sits with her butter churn, peering out at the sunrise. Brash young cowboy Curly approaches the farm a-singin’ (“Oh, What a Beautiful Mornin’”). Aunt Eller tells Curly if he weren’t so young she'd marry him and make him sing to her every night. Aunt Eller’s niece Laurey enters, surprised at the early arrival of a guest (“Laurey’s Entrance”). Laurey and Curly verbally spar, and Curly teases if she keeps it up he won’t ask her to the Box Social. He spins a wonderful vision of a fancy new buggy he’d take her out in (“The Surrey With the Fringe on Top”). Laurey, dubious of Curly's claims, chides him, and he goes off, discouraged. Meanwhile, dimwitted but good-hearted Will Parker has returned from a trip to Kansas City. He won a competition for lassoing steer, earning $50 – the amount Ado Annie’s father said he needed to have in order to marry her. Naturally, he spent all the money on presents for her, and tells the gang all about his adventures in the big city (“Kansas City”).

As the gang disperses, Aunt Eller tells Curley that her growly but excellent farmhand, Jud Fry, has had his eye on Laurey. Jud confronts Curly and reveals that he is taking Laurey to the Box Social. Deflated, Curly asks Aunt Eller to the Social (“The Surrey With the Fringe on Top” Reprise). Laurey tells Aunt Eller that she is nervous to go to the Social alone with Jud due to some disturbing behaviour. Aunt Eller tells her to stop imagining things, and spots the peddler, Ali Hakim, coming up to the farm with Ado Annie. While Aunt Eller goes to berate the peddler about a faulty egg-beater, Laurey asks Ado Annie why she is with Ali Hakim when Will has come back from Kansas City. Ado Annie tells her that she is going to the Box Social with him, even though she’s only maybe-promised to Will Parker (“I Cain’t Say No”). When Ali and Aunt Eller return, Ali offers Laurey the Elixir of Egypt, a special kind of smelling salts that will help her in making a decision. But Laurey isn’t the only one with a decision to make; thinking Ali Hakim wants to marry her, Ado Annie has to choose between her peddler and Will Parker, who comes to present her with her gifts from the big city. Later in the afternoon, some of the girls come over to prepare for the Social (“Entrance of Ensemble”). Laurey, noticing Curly has taken up with another girl, insists she doesn't care because there are plenty of men to choose from (“Many a New Day”).

Meanwhile, Ado Annie tells Ali she has decided to marry Will. Ali is relieved to be released from a commitment he doesn't want to make, but Ado Annie’s father threatens Ali with his shotgun and tells him he had better be proposing marriage. In fear for his life, Ali reluctantly agrees (“It’s a Scandal! It’s a Outrage!”). As Laurey packs up her hamper for the Social, Curly asks her one more time if she is really going to drive to the Social with Jud, seeing as everyone expects him to take her. She confirms that she's going with Jud, and, in a flirtatious manner, suggests this may be for the best (“People Will Say We’re in Love”). Rejected and frustrated, Curly goes down to Jud's smokehouse, where he spins a fantasy of how sad everyone would be at Jud's funeral (“Pore Jud is Daid”). Despite Curly's taunting, Jud insists he will take Laurey to the Box Social. Left alone in his smokehouse, Jud laments his situation and dreams of holding Laurey without her being afraid (“Lonely Room”).

Still reeling from her confrontation with Curly, Laurey decides to take the smelling salts so she can decide between Curly and Jud (“Out of My Dreams”). As she falls asleep, a dream ballet ensues (“Dream Sequence”). Laurey sees herself happily dancing with Curly and falling in love. On their wedding day, she walks down the aisle, but to her horror, it’s Jud and not Curly to takes off her veil. As her nightmare continues, Laurey sees a fight between Curly and Jud, which ends in Curly’s death. Heartbroken, Laurey awakens to the voice of Jud telling her it’s time to go to the party. Warily, Laurey sets off with Jud.

At the Box Social, the attendees joyfully sing about the friendly rivalry between the cowboys and the farmers (“The Farmer and the Cowman”). After the big dance, it's time to start the auction for the hampers: each hamper was prepared by an eligible girl; If you win the hamper, you win a date with the girl. Meanwhile. Ali Hakim has found Will Parker and, trying to get out of his engagement, offers to buy $50 worth of gifts back so Will can marry Ado Annie. From Will, Jud also buys a tool called “The Little Wonder,” which appears to be a harmless picture viewer, but actually contains a secret switch blade that can kill the observer. Newly invigorated, Will goes off to win Ado Annie’s hamper, but he foolishly bids the $50 he just earned back. In order to finally be free of Ado Annie, Ali Hakim bids $51 for the hamper so Will can finally get permission from Ado Annie’s father. Up next is Laurey’s hamper, and a battle between Jud and Curly ensues, with each man giving up everything he has to win her hamper, and therefore, her love. Curly ends up winning, and Jud tries to get Curly to try out The Little Wonder, but Aunt Eller – by chance – ends up saving him.

Outside, Ado Annie and Will set the date for their wedding. But knowing everything that happened with Ali Hakim, Will tells Ado Annie that she has to stop flirting with other guys (“All Er Nuthin’”). She agrees. As Jud and Laurey make their way to the dancing, Jud confronts Laurey and asks her why she doesn’t want to be alone with him. She denies it, but Jud begins making threats and Laurey bans him from the farm. Curly finds Laurey in distress, and she tells him she’s afraid for her life. He comforts her, then, plants a gentle kiss on her lips. The two confess their love for each other, and Curly proposes marriage (“People Will Say We’re in Love" Reprise).

Time passes, and members of the town scout the back of Laurey’s farmhouse to make sure Jud Fry has not returned. Sure that the coast is clear, the newly married Curly and Laurey come home to celebrate. The townspeople celebrate their wedding, remarking that they’ve picked a perfect time to start their new life in a soon-to-be state (“Oklahoma”). After they rejoice, Laurey leaves to go change so she and Curly can leave for their honeymoon. But as the couple reappears, Jud shows up, claiming he has a present for the groom. Instead, Jud pulls out a knife and tries to kill Curly. In the chaos of the ensuing fight, Jud falls on his own knife and dies. Curly and Laurey are horrified. The Judge declares they can give Curly a fair trial right then and there; Curly is declared not guilty since he acted in self-defence. The couple is permitted to depart for their honeymoon, ready for their brand new life together (“Finale Ultimo”).