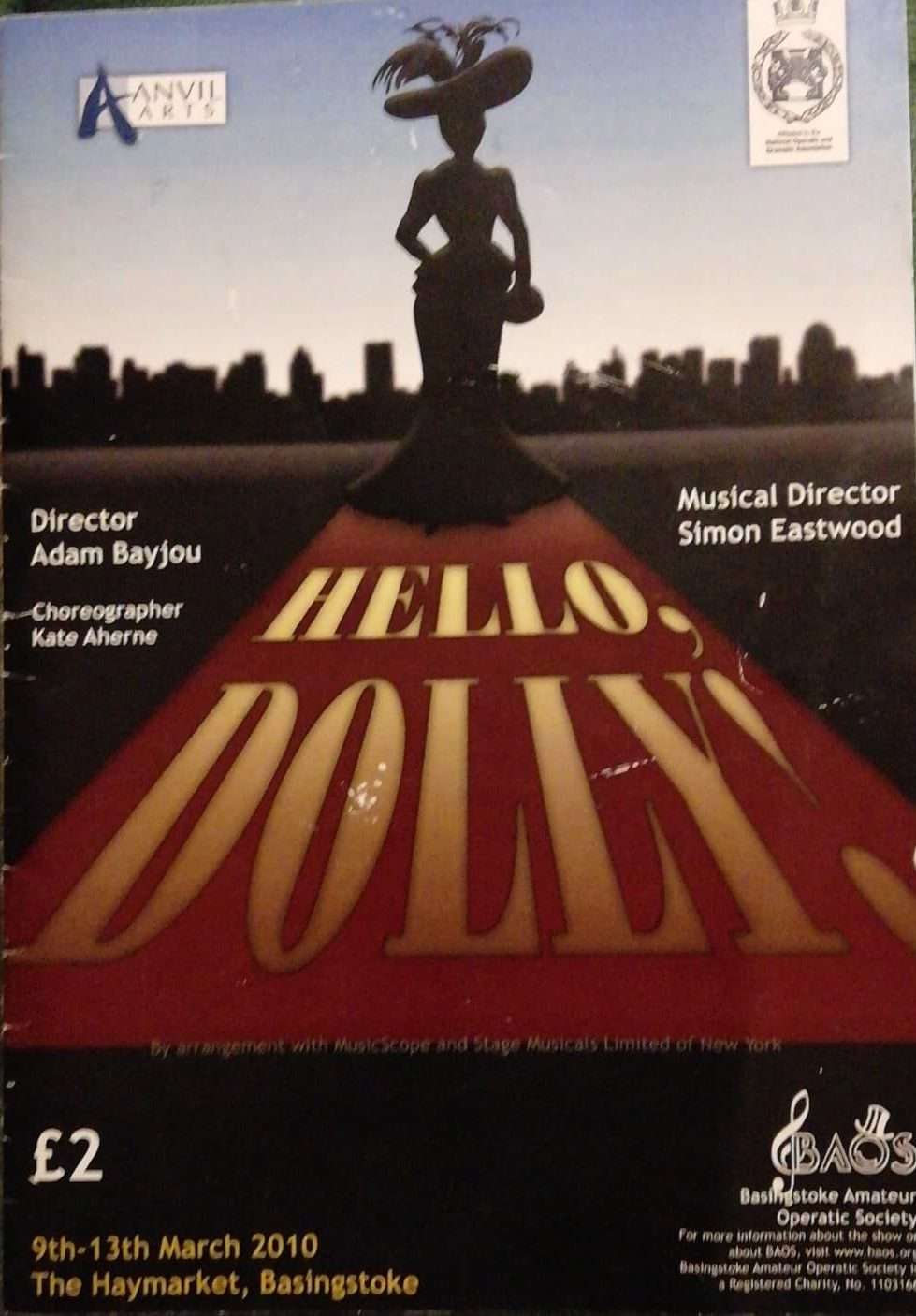 Based on the play “The Matchmaker” by Thornton Wilder
Original Production Directed and Choreographed by Gower Champion
Produced for the Broadway Stage by David Merrick and Champion Five, Inc.

In turn-of-the-century Yonkers, New York, everyone turns to professional meddler and matchmaker Dolly Gallagher Levi for advice on romance, practical matters and everything else (“Call on Dolly”). Dolly, of course, is happy to oblige (“I Put My Hand In”).

The town’s miserly half-a-millionaire Horace Vandergelder, a widowed hay & feed dealer, seeks a second wife (“It Takes A Woman”) and hires Dolly to find him a suitable match. Though she arranges for Horace to meet the young widow Irene Molloy, Dolly clearly has her own interest in Horace—and his money. Meanwhile, a young artist named Ambrose Kemper seeks Dolly’s assistance in acquiring the hand of Vandergelder’s niece, Ermengarde.

When Vandergelder leaves Yonkers for New York City to court Mrs Molloy, his clerks, Cornelius Hackl and Barnaby Tucker, decide to take an unauthorised holiday themselves, vowing to find adventure in the big city (“Put On Your Sunday Clothes”). Meanwhile, in her New York hat shop, Irene wistfully considers pursuing a new relationship, or at least a flirtation, after years of mourning her late husband (“Ribbons Down My Back”).

Barnaby and Cornelius arrive in New York City and excitedly explore the sights. They spot Vandergelder on the sidewalk and hurriedly take refuge in the nearest shop, which happens to be Irene’s millinery. Cornelius and Irene are immediately smitten, but Vandergelder appears at the shop door, and the young men scramble to hide. Dolly, arriving just in time, joins Irene and her assistant Minnie Fay as they distract the irate Vandergelder (“Motherhood March”). Frustrated and thoroughly flummoxed, Vandergelder leaves in a huff.

As partial recompense, Dolly orders the clerks to take Irene and Minnie to the lavish Harmonia Gardens restaurant for dinner. Cornelius, who clearly could never afford such an extravagance, claims he can’t dance, but the versatile Mrs Levi teaches him on the spot, and soon the two couples are waltzing romantically (“Dancing”). The young foursome runs off to watch a parade, and Dolly – addressing her late husband, Ephraim – reaffirms a desire to move on with her life (“Before the Parade Passes By”).

Cornelius and Barnaby, too poor to afford a taxi, persuade the ladies that walking to the restaurant is far more elegant than hiring a hack (“Elegance”).

At the Harmonia Gardens, Rudolph, the majordomo, exhorts his waiters to provide even better and faster service tonight—Dolly Levi is coming back! In a welter of dazzling precision, criss-crossing at breakneck speed, the staff prepares for Dolly’s arrival (“The Waiters’ Gallop”). Cornelius and the party arrive and occupy a luxurious private dining booth, complete with the drawn curtain. Horace and his date, Ernestina Money, reputed by the conniving Dolly to be an heiress, sit in another. Ernestina, who proves to be less refined than Horace had hoped, soon gets drunk and passes out.

Finally, Dolly makes her grand entrance and the entire restaurant celebrates (“Hello, Dolly!”). Dolly settles down to eat with Horace, talking incessantly and repeatedly rejecting a proposal of marriage… which he never makes.

A dance contest begins (“The Polka Contest”), and just as Ambrose and Ermengarde are declared the winners, Horace discovers he has the wrong wallet; he and Barnaby, through a mix-up, have exchanged them. In the melee that follows, Rudolph calls the police, and the whole party is arrested. In the courthouse, Cornelius admits he’s no playboy millionaire, but it doesn’t matter; he loves Irene and he’ll always have the memory of one miraculous day (“It Only Takes A Moment”). The judge, moved by Cornelius’s sentiment and persuaded by Dolly Levi, Counselor-At-Law, dismisses everyone except Horace Vandergelder. Horace expects Dolly to help him, but instead, she chooses to walk away (“So Long, Dearie”).

The next morning, back in Yonkers, a chastened Horace Vandergelder reflects on the recent events in his life and realises he’s hopelessly in love with Dolly. Dolly enters the store and convinces Horace to take Cornelius as his business partner and allow Ambrose and Ermengarde to marry. Still unsure about marrying Horace, Dolly asks her late husband Ephraim for a sign. Horace, who has hired a fledgeling businessman to renovate his home, spontaneously repeats an old saying of Ephraim's: "Money is like manure. It's not worth a thing unless it's spread about, encouraging young things to grow." Satisfied, Dolly agrees to marry Horace and vows she’ll “never go away again” (Finale: “Hello, Dolly”).