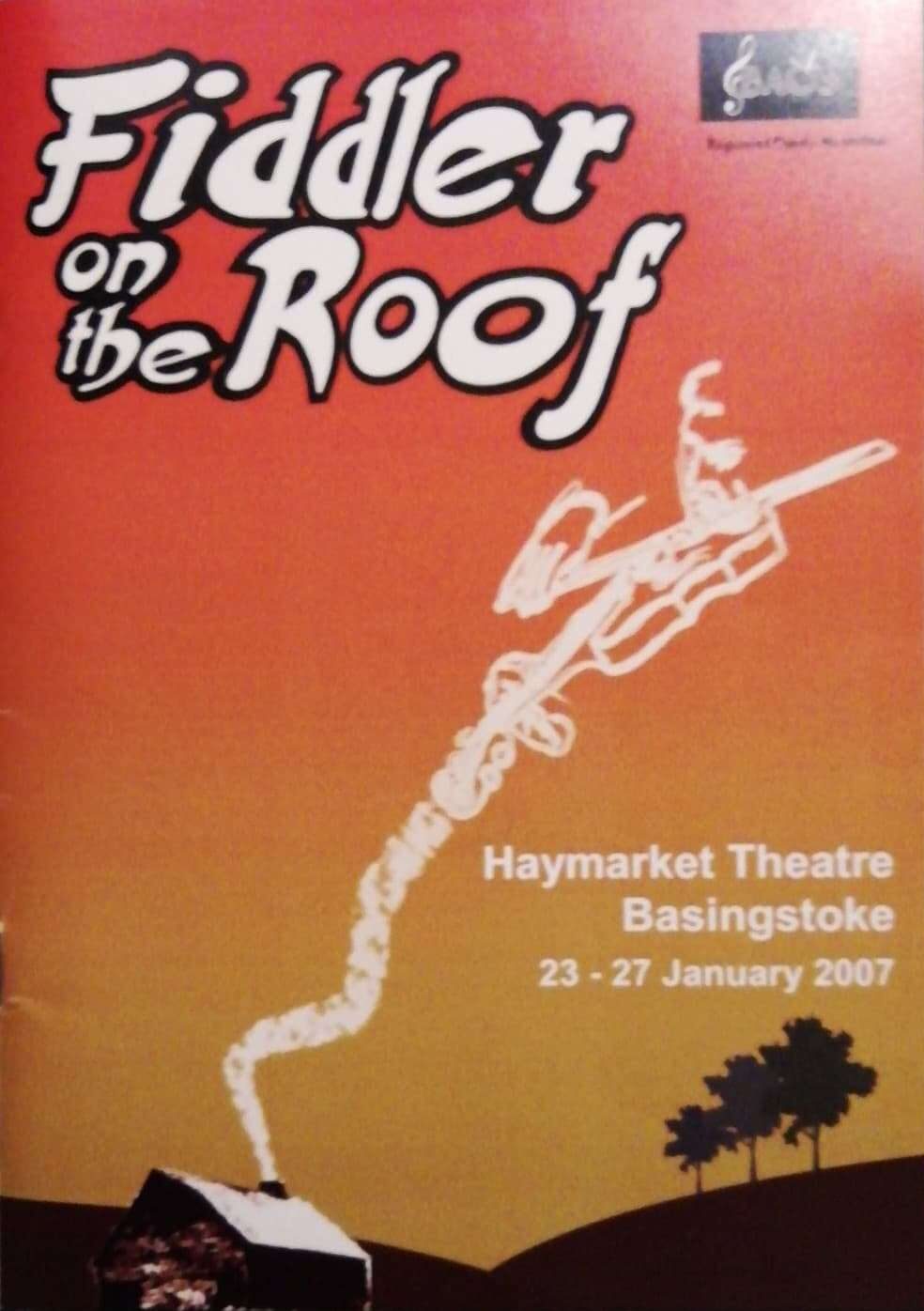 Based on Sholem Aleichem stories by special permission of Arnold Perl

FIDDLER ON THE ROOF
An amateur production presented by arrangement with Music Theatre International (Europe)
All authorised performance materials are also supplied by MTI Europe.  www.MTIShows.co.uk

During the Prologue ("TRADITION"), Tevye explains the role of God's law in providing balance in the villagers' lives. He describes the inner circle of the community and the larger circle which includes the constable, the priest, and countless other authority figures. He explains, "We don't bother them and so far, they don't bother us." He ends by insisting that without their traditions, he and the other villagers would find their lives "as shaky as a fiddler on the roof."

Three of Tevye's daughters, Tzeitel, Hodel, and Chava, wonder if the matchmaker will ever find them the men of their dreams ("MATCHMAKER"). The matchmaker, Yente, tells Golde that she has selected the butcher Lazar Wolfe as a match for Tzeitel.

Tevye reflects on how much he wishes he had a small fortune ("IF I WERE A RICH MAN"). A group of villagers, including an outsider, Perchik, approach him with news of a violent pogrom in a nearby village. Tevye invites Perchik, a young revolutionary student, to come to his home for Sabbath dinner and arranges for him to instruct his daughters.

Motel, the tailor attempts to ask Tevye for Tzeitel's hand, but gets tongue-tied. The family and their guests welcome the Sabbath ("SABBATH PRAYER").

Tevye goes to meet Lazar Wolfe, the butcher, and agrees to the match with Tzeitel. A boisterous celebration ensues involving the villagers and the Russians who also congregate in the tavern ("L'CHAIM").

As Tevye staggers home, he meets the Constable, who warns him that a demonstration is going to be planned against the Jews of Anatevka. In his inebriation, Tevye conjures The Fiddler, who plays his violin as Tevye dances his way home.

Tevye appears and tells Tzeitel about her engagement to Lazar Wolfe. Golde rejoices, but after she leaves, Motel tells Tevye that he and Tzeitel gave each other a pledge to marry. After a struggle with himself, Tevye agrees to their marriage. He leaves and Motel and Tzeitel rejoice ("MIRACLE OF MIRACLES").

Tevye decides to manufacture a wild nightmare ("THE DREAM") to convince Golde that the match with Lazar will result in Tzeitel's death at the hands of the butcher's first wife, Fruma-Sarah. Golde is so horrified that she insists on a marriage between Tzeitel and Motel.

The villagers are gossiping in the street about the mix-up in Tzeitel's wedding plans. As Chava enters Motel's tailor shop, a group of Russians on the street taunt her. Fyedka, a Russian youth, insists that they stop. After they leave, Fyedka follows Chava into the shop. He tries to speak with her, but leaves quickly when Motel enters. Motel places his wedding hat on his head.

The musicians lead us to the wedding. The company sings ("SUNRISE, SUNSET") as the traditional Jewish ceremony takes place. To the villagers' dismay, Perchik asks Hodel to dance with him and she accepts, performing the forbidden act of dancing with a man. Everyone else follows suit. As the dance reaches a wild high point, the Constable and his men enter. They destroy everything in sight. Perchik grapples with a Russian and is hit with a club. The constable bows to Tevye and says " I am genuinely sorry. You understand?" Tevye replies with mock courtesy, "Of course." The family begins to clean up after the destruction.

During the Prologue, Tevye chats with God about recent events. Perchik tells Hodel that he is leaving to work for justice in Kiev. He proposes to her and she accepts ("NOW I HAVE EVERYTHING"). He promises to send for her as soon as he can. Tevye approves in spite of his misgivings. After they leave, he asks Golde if she thinks their own arranged marriage has somehow also turned into a romance ("DO YOU LOVE ME?").

On a village street, Yente tells Tzeitel she has seen Chava with Fyedka. The news Yente has gleaned from a letter from Perchik becomes gossip for the villagers, who turn it into a song that totally distorts the truth ("THE RUMOR").

Tevye takes Hodel to the railroad station. She is going to Siberia where Perchik has been sent after his arrest ("FAR FROM THE HOME I LOVE").

The villagers are once again gossiping about a new arrival at Motel and Tzeitel's.

Tevye returns home to learn from Golde that Chava and Fydeka have been married by the priest. Tevye says that Chava is dead to them. He sings of his love for Chava ("LITTLE BIRD"). When Chava appears to ask his acceptance, he cannot allow himself to answer her plea. Chava exits as unseen voices sing ("TRADITION").

Yente is trying to fix up Tevye's remaining daughters with two boys as future husbands. The Constable brings the news that everyone in the town has to sell their houses and household goods and leave Anatevka in three days. As the villagers think of their future, they sing fondly of the village they are leaving ("ANATEVKA").

The family is packing the wagon to leave. Tzeitel and Motel are staying in Warsaw until they have enough money to go to America. Hodel and Perchik are still in Siberia. Chava appears with Fyedka. Tevye refuses to acknowledge her. Chava explains that they are also leaving because they cannot stay among people who can do such things to others. They are going to Cracow. Tzeitel says goodbye to them and Tevye prompts Tzeitel to add, "God be with you!" Chava promises Golde she will write to her in America. Chava and Fyedka leave. Final goodbyes are said and Tevye begins pulling the wagon. Other villagers join the circle, including The Fiddler. Tevye beckons to the The Fiddler to follow him. The Fiddler tucks his fiddle under his arm and follows the group upstage as the curtain falls.