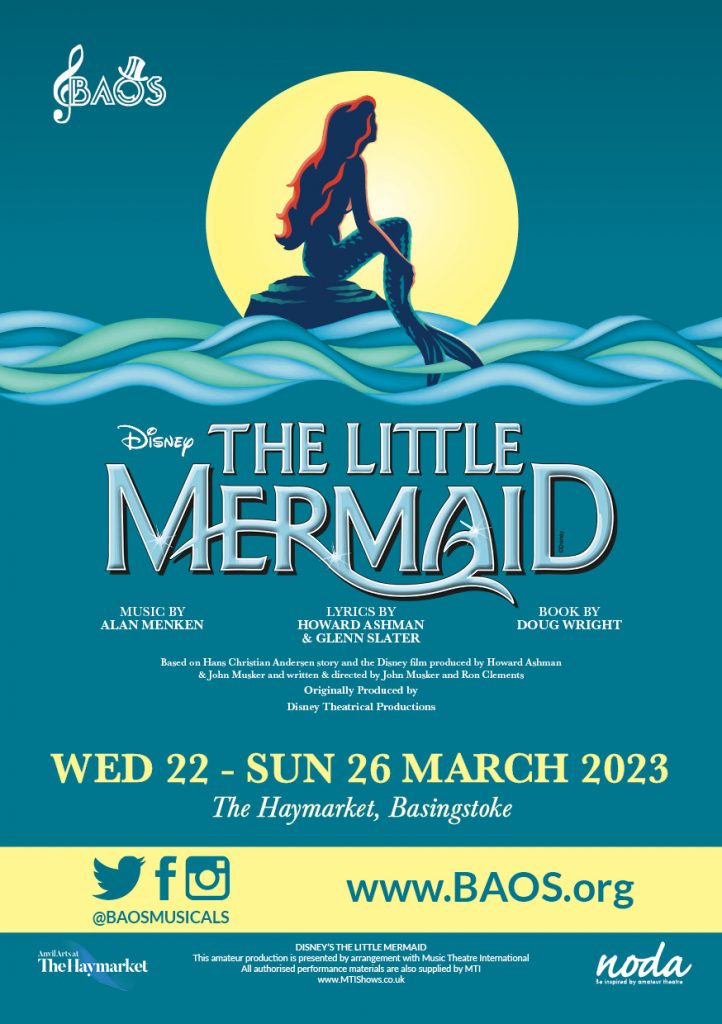 On this evening meet the production team and find out how Basingstoke will set sail for another amazing production!

DON’T FORGET – To Audition for this wonderful production then you MUST have registered your interest (comms@baos.org)

Ariel, a beautiful young mermaid, crashes to the sea’s surface, delighting in the expansive sky and the warm sun on her skin (THE WORLD ABOVE). In the distance, a ship appears bearing a sea-loving Prince Eric and his guardian, Grimsby (FATHOMS BELOW). As the ship sails into the horizon, Ariel, shadowed by her best friend, Flounder, recovers a sinking fork that Eric has tossed overboard. The seagull Scuttle swoops in and teaches them about this “dinglehopper” and other human stuff, reminding Ariel that she’s late for an engagement below the surface.

On the ocean floor, Sebastian has arranged a concert in celebration of King Triton’s anniversary as reigning monarch, featuring the King’s seven daughters (DAUGHTERS OF TRITON), but Ariel arrives late and ruins the concert. King Triton wonders if his daughter would be better off if her mother was still alive to guide her (IF ONLY – TRITON’S LAMENT), and he appoints Sebastian as her chaperone to keep her out of trouble.

In Ursula’s lair, her flunkies Flotsam and Jetsam report back on the celebration, prompting the Sea Witch to reminisce bitterly about her childhood and her brother Triton’s ascension to the throne (DADDY’S LITTLE ANGEL). Ursula vows to ruin King Triton by destroying what he loves most in the world – Ariel. Meanwhile, Ariel bemoans her dad’s lack of understanding and wonders how he could hate a world that she finds so beautiful (PART OF YOUR WORLD). Sebastian barges in and begins taking charge, but Ariel becomes distracted by a ship passing overhead.

On the ship, Prince Eric and Grimsby argue. Eric has no interest in becoming King, but Grimsby insists that the Prince will be married by his next birthday. Suddenly, a violent storm overtakes the ship, throwing Eric overboard. Ariel, who had been admiring the Prince from afar, dives below the surface to rescue Eric, whom she returns safely to the shore (PART OF YOUR WORLD – REPRISE). Back under the water, the Mersisters grill Flounder about Ariel’s odd behaviour (SHE’S IN LOVE), while on the beach an enamored Eric resolves to find his savior with the enchanting voice (HER VOICE). In an effort both to please Eric and find him a bride, Grimsby arranges a singing contest in order to locate the owner of the mysterious voice.

Upon discovering her love for the world above, Sebastian extols the virtues of the ocean (UNDER THE SEA). Undeterred, Ariel swims away to her secret grotto where King Triton, furious at his daughter for saving a human, destroys her human treasures, including a bust of Prince Eric. Sebastian tries to comfort her, but Ariel, still hurt by her father’s actions (IF ONLY – ARIEL’S LAMENT), is lured to Ursula’s lair by Flotsam and Jetsam. The Sea Witch offers to transform Ariel into a human in exchange for her voice (POOR UNFORTUNATE SOULS). Ursula’s contract states that Prince Eric must kiss Ariel within three days or she will turn back into a mermaid and become Ursula’s slave forever. Overcome by her dreams of the world above, Ariel agrees to the bargain and trades her voice for human legs.

On the beach, Flounder and Sebastian fret about the three-day timeline. Ever optimistic, Scuttle is convinced that Ariel has what it takes (POSITOOVITY) to win over Prince Eric, who finds her and brings her home to the palace. Below the surface, King Triton worries about his daughter’s safety, but up on land, Ariel is elated by the wonders of palace life (BEYOND MY WILDEST DREAMS). Sebastian, who has followed Ariel to the palace in order to protect her, finds himself in jeopardy in Chef Louis’s kitchen (LES POISSONS). Sebastian continues to elude the frustrated chef ’s grasp (LES POISSONS – REPRISE), while Ariel’s silence prompts Prince Eric to find other ways to communicate, like dancing (ONE STEP CLOSER) – but he is still haunted by the mysterious voice.

Ariel’s progress with Eric on the first day makes Ursula nervous, but she vows to take revenge on Triton through his daughter (DADDY’S LITTLE ANGEL – REPRISE). On the second day, Sebastian calls on lagoon animals to serenade the couple (KISS THE GIRL), but Flotsam and Jetsam cause a commotion that blocks their kiss. In desperation, Sebastian informs King Triton of Ariel’s contract, and the King swears to settle things with Ursula once and for all.

As night falls on the second day, Ariel wishes she could tell Eric how she truly feels while Eric longs for the mysterious voice, Sebastian wishes he could solve this predicament and King Triton regrets pushing Ariel away (IF ONLY – QUARTET).

At the singing contest the next day (THE CONTEST), Ariel bursts through the crowd of opportunistic princesses and rather than singing, she dances, prompting Prince Eric to realize how much he truly loves her. But the sun has set, breaking the spell, and Ursula drags Ariel, a mermaid once again, back into the sea.

King Triton confronts Ursula, who agrees to free Ariel if he hands over his trident and becomes Ursula’s slave (POOR UNFORTUNATE SOULS – REPRISE). Just as Ursula attempts to harness the power of the seas now in her control, Ariel swims past her and grabs her magic shell, regaining her voice. Unable to control her pride, Ursula reveals that she was the one who murdered Ariel’s mother, prompting Ariel to destroy the shell and, with it, the Sea Witch.

With order restored, Ariel returns the trident to her father. Realising that Ariel has grown up and that she cares deeply for Prince Eric, King Triton decides to restore her human form. Together, father and daughter swim to the surface, where Prince Eric proposes to Ariel, then learns that it has been her voice he has been seeking all along (FINALE ULTIMO).