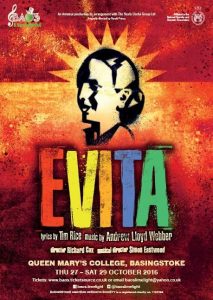 EVITA
An Amateur production by arrangement with The Musical Company

On 26 July 1952, a crowd in a Buenos Aires, Argentina theatre is watching a movie ("A CINEMA IN BUENOS AIRES, 26 JULY 1952") that is interrupted when news breaks of the death of First Lady Eva Perón. Both the crowd and the nation go into a period of public mourning ("REQUIEM FOR EVITA") as Che, a member of the public, marvels at the spectacle and promises to show how Eva did "nothing for years" ("OH WHAT A CIRCUS").

In 1934, 15-year-old Eva Duarte lives in the province of Junín and longs to seek a better life in Buenos Aires. Eva falls in love with a tango singer-songwriter, Agustín Magaldi, after she meets him at one of his shows ("ON THIS NIGHT OF A THOUSAND STARS"). Eva persuades Magaldi to take her with him to Buenos Aires and though he is initially resistant, he eventually accepts ("EVA, BEWARE OF THE CITY"). Upon her arrival in the city, Eva sings about her hopes and ambitions of glory as an actress ("BUENOS AIRES").

After her arrival, Eva is quick to leave Magaldi, and Che relates the story of how Eva sleeps her way up the social ladder, becoming a model, radio star, and actress ("GOODNIGHT AND THANK YOU"). He then tells of both a right-wing coup in 1943 and Eva's success, implying that Argentine politics and Eva's career may soon coincide. Che also makes a point to introduce the figure of Colonel Juan Domingo Perón, an ambitious military colonel who was making his way up the Argentine political ladder ("THE LADY'S GOT POTENTIAL"). In a game of musical chairs that represents the rise of political figures, Perón and other military figures compete for power and exhibit their political strategy ("THE ART OF THE POSSIBLE").

After a massive earthquake hits the town of San Juan, Perón organizes a charity concert at Luna Park to provide aid to the earthquake's victims. Eva attends and briefly reunites with Agustín Magaldi, who coldly shuns her for her past actions. Perón addresses the crowd with words of encouragement and leaps off the stage, meeting Eva as soon as he exits ("CHARITY CONCERT"). Eva and Perón share a secret rendezvous following the charity concert, where Eva hints that she could help Perón rise to power ("I'D BE SURPRISINGLY GOOD FOR YOU"). Eva dismisses Perón's Mistress (the character is known only by that title), who ponders the rejection ("ANOTHER SUITCASE IN ANOTHER HALL").

Upon moving in with Perón, Eva is introduced to high society only to be met with disdain from the upper classes and the Argentine Army ("PERÓN'S LATEST FLAME"). In 1946, after launching his presidential bid, Perón discusses his chances of winning the election with Eva. After reassuring him of their chances of winning, Eva organizes rallies for the descamisados and gives them hope for a better future while Perón and his allies plot to dispose of anyone who stands in their way ("A NEW ARGENTINA").

During the period between Act I and Act II, Eva and Perón are married – a fact merely alluded to, in the "Casa Rosada balcony" scene, at the start of Act II.

Perón is elected President in a sweeping victory in 1946. He stands "On The Balcony of the Casa Rosada" addressing his descamisados (shirtless ones). Eva speaks from the balcony of the Presidential Palace to her adoring supporters, where she reveals that despite her initial goal of achieving fame and glory, she has found her true calling to be the people of her country ("DON'T CRY FOR ME, ARGENTINA"). Che analyses the price of fame as Eva dances at the Inaugural Ball with Perón, now the president-elect ("HIGH FLYING, ADORED").

Eva insists on a glamorous image to impress the people of Argentina and promote Perónism. She prepares to tour in Europe as she is dressed for success by her fashion consultants ("RAINBOW HIGH"). Her famous 1946 tour meets with mixed results ("RAINBOW TOUR"); Spaniards adore her, but the Italians liken her husband to Benito Mussolini. France is impressed, and the English snub her by inviting her to a country estate, rather than Buckingham Palace. Eva affirms her disdain for the upper class, while Che asks her to start helping those in need as she made a promise ("THE ACTRESS HASN'T LEARNED THE LINES (YOU'D LIKE TO HEAR)"). Eva begins the Eva Perón Foundation to direct her charity work. Che describes Eva's controvertible charitable work, and possible money laundering ("AND THE MONEY KEPT ROLLING IN (AND OUT)").

Eva appears at a church to take the sacrament in front of her adoring supporters ("SANTA EVITA") but passes out suddenly, and while unconscious, appears to have a dream that reflects upon the conflicting views of her life. In her dream, she and Che heatedly debate her actions; Che accuses Eva of using the Argentine people for her own ends, while Eva cynically replies that there is no glory in trying to solve the world's problems from the sidelines ("A WALTZ FOR EVA AND CHE"). At the end of the argument, Eva finally admits to herself and Che that she is dying and can't go on for much longer. Che points out the disastrous results of Perón's policies on Argentina: its treasury is bankrupt, its once-thriving beef industry is under rationing, and the press and other critics of the regime are muzzled.

Perón's generals finally get sick of Eva's meddling and demand that Perón force her to leave politics. However, Perón objects and claims that if it wasn't for her, they would never have achieved as much as they have ("SHE IS A DIAMOND"). But he also concedes that she won't be able to keep working for long as she will soon succumb to her cancer. Even so, Eva is determined to run for Vice President, and Perón fears that the military will stage a coup if she runs and that Eva's health is too delicate for any stressful work, but Eva insists that she can continue, despite her failing health ("DICE ARE ROLLING/EVA'S SONNET").

Realizing that she's about to die, Eva renounces her pursuit of the vice presidency and swears her eternal love to the people of Argentina ("EVA'S FINAL BROADCAST"). Eva's numerous achievements flash before her eyes before she dies ("MONTAGE"), and she asks for forgiveness, contemplating her choice of fame instead of long reign ("LAMENT"). Evita dies, and embalmers preserve her body forever. Che notes that a monument was set to be built for Evita, but says that "only the pedestal was completed, and Evita's body disappeared for 17 years."