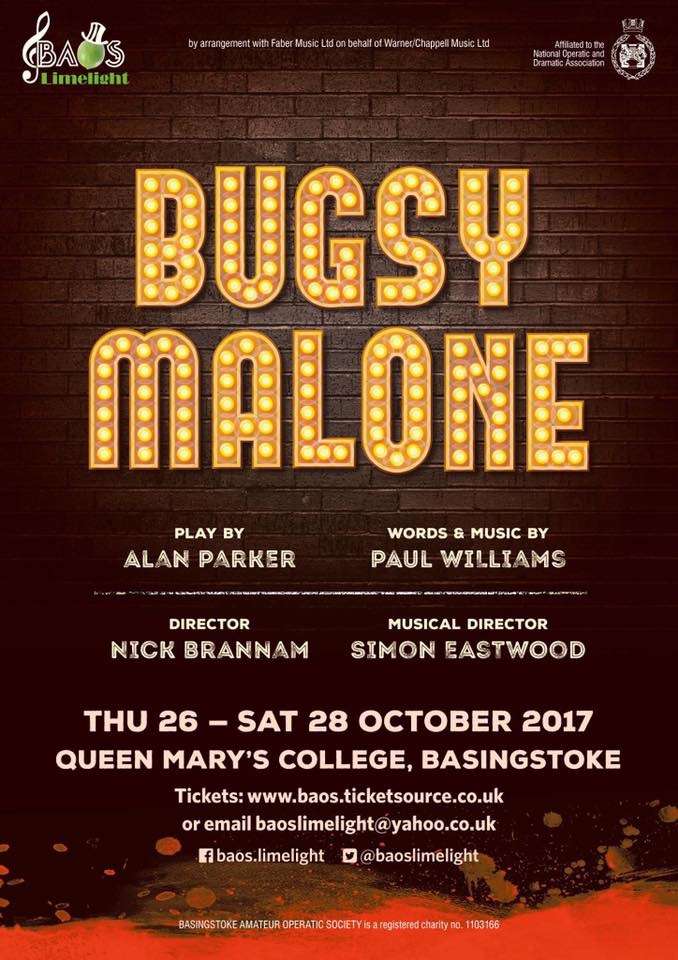 As the musical opens, Bugsy Malone, a one-time boxer who's neither completely honest nor crooked, ushers us through his neighbourhood where three murders have just occurred ("BUGSY MALONE"). Bugsy winds up at the local speakeasy, owned by gangster boss Fat Sam ("FAT SAM'S GRAND SLAM"). Turns out, one of those murders was that of Roxy "the Weasel" Robinson – one of Fat Sam's best men. Enraged, Fat Sam, vows revenge on Dandy Dan whose henchman carried out the hit. Meanwhile, Bugsy's been chatting up Blousy Brown, the new girl in town who's come to audition for Fat Sam's club; but Fat Sam's given her the brush off (as he does to everyone) and tells her to come back tomorrow. Bugsy takes Blousey for dinner and she tells him she's going to audition for the Lena Marelli show as well. Just as the mood turns romantic, however, Dandy Dan's men raid the club.

Meanwhile, back at the Fat Sam's speakeasy, they're closing up shop. Fat Sam and his girl, Tallulah (who's also the entertainment at his club), are preparing to go out on the town. Fizzy, the janitor, sings about his ever-elusive chance to audition for Fat Sam ("TOMORROW").

In the next scene, we're at the auditions for the Lena Marelli show. Lena (as she does every week) has quit, and Oscar de Velt is casting a replacement. Just as Blousey takes the stage to sing, however, Lena returns (as she does every week) and takes the stage ("SHOW BUSINESS"). Bugsy tries to cheer a dejected Blousey up and promises to talk to Fat Sam about an audition.

Cut to Fat Sam's speakeasy, where Fat Sam and his gang are getting nervous about Dandy Dan's new initiative ("BAD GUYS"). Fat Sam fears his gang is behind the times. They need to upgrade their weapons; so he contacts Shady, a Chinese laundryman, who locates a stash of "splurge guns;" but, Shady's a two-timer, paid off by Dandy Dan to lure Fat Sam's gang into a trap. Upon retrieving the guns, however, Fat Sam's gang is wiped out. Fat Sam and Knuckles (his right-hand man) are panicking now but determined to "act normal" as they try to figure out what to do. Just then, Blousey arrives to audition. Instead of turning her away, however, they ask her to wait – they'll be right with her. They decide to enlist the help of the murdering lunatic Looney Bergonzi and arrange a meeting with Dandy Dan.

At the club, Tallulah is putting the moves on Bugsy as Fat Sam and Knuckles arrive at audition Blousey, who walks in just as Tallulah plants a big smooch right on Bugsy ("I'M FEELING FINE"). Blousey books the gig and Fat Sam offers Bugsy $200 to drive him to his meeting with Dandy Dan. Back at the girls' dressing room, Bugsy tries to reconcile with a very angry Blousey, but Blousey is unconvinced.

In the next scene, Fat Sam and Dandy Dan confront each other. But just as Fat Sam reveals his secret weapon, Looney Bergonzi, Dan's gang emerges from the trees and "splurge" him. Bugsy grabs Fat Sam and they escape. Grateful, Fat Sam gives him an extra $100 for being quick on his feet and tells him to get a new suit ("BUGSY MALONE" REPRISE).

As the second act opens, we're in the girls' dressing room at Fat Sam's and Tallulah is rehearsing her number ("MY NAME IS TALLULAH"). Having earned his money and the loan of Fat Sam's snazzy car, Bugsy calls on Blousey to take her out on a date. He tells her he wants to use the cash to buy them two tickets to Hollywood. Elated, she agrees to go. ("I'M FEELING FINE" REPRISE).

Meanwhile, Fat Sam has fashioned his own "splurge gun," but the gun misfires and he kills his main man Knuckles. In an additional bit of bad luck, Bugsy is jumped by some thugs who steal his hard-won $200. Leroy, a stranger who happens to be walking by, beats off the thugs. Bugsy's impressed by his punching skill; and although he's $200 poorer, he's found his first boxing client and proclaims himself Leroy's manager. Bugsy takes Leroy to meet Cagey Joe who determines that Leroy has what it takes to be a champion ("SO YOU WANNA BE A BOXER").

Poor Fat Sam's luck has turned from bad to worse when he gets a phone call that Dandy Dan has destroyed his hooch stills and taken over his grocery racket. He sends Tallulah to ask Bugsy for help. She finds him waiting for Blousey to catch a train to Hollywood. But when she says he'll be handsomely rewarded for his help, Bugsy decides to delay the trip. Fat Sam offers him $400 to help him save what's left of his empire and Bugsy agrees. Just then, Blousey calls. She's been waiting for him for an hour to catch a train to Hollywood. He tells her Hollywood's going to have to wait – he has business to attend to. Blousey is heartbroken ("ORDINARY FOOL"). Dejected, she returns to Fat Sam's to get her job back as Bugsy enlists the help of Leroy, the wanna be prizefighter, to take care of Dandy Dan once and for all.

They arrive at the centre of Dan's gun-running operation "Splurge Imports" only to find they are severely outnumbered. Just then they come across a group of "down and outs" waiting in a soup line. Together, Bugsy and Leroy convince them to be their ad-hoc army ("DOWN AND OUT"). They distract the guards and storm the warehouse only to be surrounded by the police. Fortunately, they find a secret escape and leave the police holding their hats. They arrive back at Fat Sam's just in time for the showdown with Dandy Dan's gang. Bugsy presents Blousey with her two tickets to Hollywood and everyone tries to "act normal" as they wait for the rumble ("FAT SAM'S GRAND SLAM" REPRISE). Immediately, however, Dan and his henchman arrive and the stage explodes into a pitched battle of splurge whip cream guns, custard pies to save Sam's club ("YOU GIVE A LITTLE LOVE").