Entertainment was very limited in Basingstoke in 1922 when BAOS was born as the Thornycroft Amateur Operatic Society, to become pioneers in the world of amateur show business. In those days, the former Corn Exchange, dubbed the Grand Cinema, had only seen modest concert parties in between the films but never a light opera, with colourful costumes, a full orchestra and cleverly painted scenery to carry people away to Venice, the Tower of London, or to Titipu in Japan.

It was all made possible as a result of a lighthearted conversation at May’s Bounty Cricket Ground following a hockey match. Someone mentioned Gilbert and Sullivan to fire the imagination; word was then conveyed to employees at Thornycrofts. With the management realising what potential they had in the firm, the operatic society started. Thornycrofts had a fine military band with R. M. Calloway as conductor, there was the work’s canteen with a splendid stage, and a goodly sized auditorium.

Among the personnel were a number of good singers and actors and it was three of these – Fred Cook, Ralph Burnaby and Ray Franklin – who conversed at May’s Bounty who were in the production which followed – the launching of HMS Pinafore on February 24th, 1922. The Society was also launched, with more productions drawing many patrons to the canteen until 1931 when Ruddigore was staged. 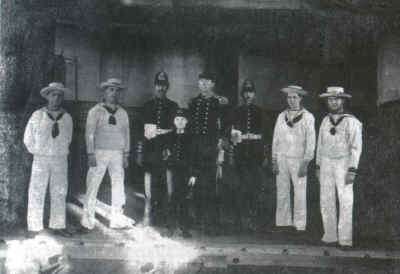 Some of the cast from our inaugural production of HMS Pinafore.

In the centre is Ralph Burnaby (Captain Corcoran), the Midshipmate is Master F. Cheffings, and on the right, Jack Dolding (Dick Deadey).

The Depression, the threat of war, and rearmament left a busy works with little time to indulge in ambitious entertaining until 1944 when a modest re-start was made by the Society with Trial By Jury. From then on, there was no turning back, for the productions were received with popular acclaim, with annual productions at the Canteen until Iolanthe was staged in 1950. From then on the Canteen was only used for rehearsal.