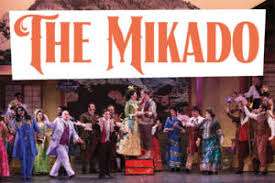 Nanki-Poo has fled from the court of his father, the Mikado of Japan, to escape marriage with an overpowering lady named Katisha, who is somewhat older than himself. Assuming the disguise of a musician, he has fallen in love with a fair maiden, Yum-Yum, but has been prevented from marrying her by her guardian, Ko-Ko, who wishes to marry her himself. Heartbroken, Nanki-Poo has banished himself from the little town of Titipu where she lives.

Upon learning that Ko-Ko has been condemned to death for the crime of flirting, Nanki-Poo returns to Titipu to claim Yum-Yum’s hand. After an odd turn of events, it turns out that Ko-Ko has not only been reprieved of his death sentence, but has earned a promotion to the post of Lord High Executioner.

Unfortunately for Ko-Ko, he is not a big fan of killing people. With the Mikado of Japan becoming increasingly annoyed at the lack of executions taking place, Ko-Ko makes a deal with Nanki-Poo. Nanki-Poo is persuaded to offer his own head in exchange for a month of connubial bliss with Yum-Yum. Yum-Yum’s ardour for Nanki-Poo is somewhat reduced, however, when she discovers that the wife of a beheaded husband is buried alive.

The feared Mikado arrives with Katisha and Ko-Ko falsely tells the Mikado that the execution has already taken place, as he has been too cowardly to behead anyone. Katisha discloses who Nanki-Poo really was, the heir to the thrown. Ko-Ko has thus beheaded the heir and must therefore die.

Facing a death sentence himself for executing the Heir, Ko-Ko pleads with Nanki-Poo to return. Nanki-Poo agrees – on the condition that Katisha is safely married off first. Ko-Ko therefore throws himself on the mercy of Katisha and begs her hand in marriage. She agrees, and begs mercy for him from the Mikado.

Nanki-Poo then returns and, of course, ends up with his beloved Yum-Yum.

Check out the page for trailers and more.