BAOS were delighted to receive  three nominations for the 2016 Daily Echo Curtain Call Awards for our production of West Side Story:

Best Choreographer
Zoe Blackall
Her routines were the over-riding memories from the show.

The cream of the region’s amateur theatre talent came together  at Southampton’s Grand Harbour Hotel in January for a glitzy dinner dance where TV star Sarah Parish opened the golden envelopes to reveal the winners in each of 37 categories.

We are extremely pleased to announce that Luannsa won her category and was crowned Best Supporting Actress in a Musical for what she described as her dream role. Congratulations Luannsa! We would also like to congratulate Zoe and Trevor on their nominations. 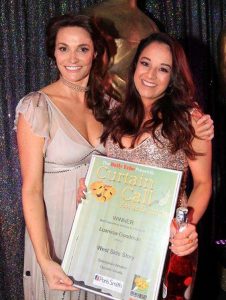